From opening for Monsters & Men to being selected to record the theme for John Lewis’ prestigious Christmas advert, it’s been a crazy 12 months for 19-year-old Aurora Aksnes. We sat down with the Norwegian singer-songwriter to discuss her musical roots, and to find out more about her beautiful, brooding debut, All My Demons Greeting Me As A Friend. 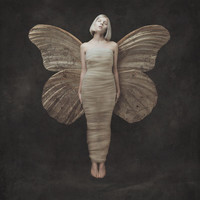 My mum always put on classical music when I was really, really young, and I guess it kind-of calmed me down. I was not a stressed kid – I was very happy and I could daydream a lot – but still everything affected me: the noise at school, the noise from cars driving, or if people were mad or arguing. It would make me really stressed, I don’t know why. I was just very easily affected by everything around me.

Do your parents play instruments?

No, but they love music. My mum is a big fan of Leonard Cohen, Kate Bush and Björk, and my dad loves Bob Dylan. So I’m a huge fan of all of those today and I’m very inspired by them. I think they’re all really wise musicians, which I think is a nice combination because you have so much power when you become an artist and you have people listening to you. I feel like they’re using that power in a very good way.

My inner happiness depends on me being loud, and telling everyone what I want.

You’re self-taught on the piano, right? When did you start playing?

Yeah, I think I was around six when I found a piano in the attic in our house. My oldest sister, Miranda, she’s 10 years older than me, and she was around 15 or 16 when she got an electronic piano to play around with. She played for a little while and then she stopped, and I just realised how much I loved that sound of piano: it’s so soft and so soothing.

So I just went up to the attic and I turned it on – and the “on” button is ruined, so you had to hold it in and play with one hand – and I realised there was a pattern. It was quite easy to play these melodies by Beethoven or Chopin or Mozart if I rehearsed enough, and just by listening to them because I don’t know anything about musical theory. It feels so different to actually play music rather than to just listen, and it is just the most wonderful feeling ever so I never stopped.

When did you begin writing songs yourself?

When I was around nine or 10. I was starting to get really influenced by Bob Dylan and Leonard Cohen, because I really adored their story-telling style. I wanted to be like them so I tried to learn guitar, but it hurt my fingers so much that I didn’t play it for long. My first songs I think I wrote on guitar. I think I wrote quite dark songs. I still do but there’s a bit more light in my songs, which is nice. You need to have some variety so it feels like an emotional journey, rather than falling into a hole.

And you kept your songs hidden?

Yeah, I was a secret music spy. (Laughs) I just really enjoyed writing songs and it made me happy, and I didn’t need anyone’s approval because I didn’t really want to do with anything with it. I didn’t think it was anything special; it was just pleasing to write a song and then move on to the next one.

How did your family find out about your songwriting?

I don’t think they knew that I could do music even before I was 14, at my confirmation ceremony. Because I’m my mum and dad’s youngest child, I decided to write a song for them, telling them that I might be growing up but I don’t be sad – I won’t leave you and I’m still your child – because I know it must be quite a weird feeling seeing the youngest one disappear into the world.

And then, when I was 15, I did one song at the last day of school, for my class mates and teachers. It was a really long, boring song about world peace, without a chorus – I think everyone hated it. (Laughs) But someone filmed that performance and put it on Facebook, and that’s how my management found me. They asked me if I wanted to stop by their office because they really liked me as a musician, and at first I didn’t want to do it because I didn’t know if I could handle putting my songs out. But then my mum said that it would be kind-of selfish to not share music that can help people, and that made me move my feet.

Is that how you view music, then, as a tool to help other people?

Yes, and myself. I think music is one of the best friends you can have. I think people are afraid to talk, and I am too. How often have you asked people, “Are you fine?” and you can see that they’re dying inside and they’re saying, “Oh I’m fine.” We’re all trying to hide and to avoid pain because it’s a scary thing, but it’s a very natural thing. I love to cry because feelings are a big part of being human, and music can help us feel so it’s very important. But it is strange to share my children with everyone.

For the benefit of anyone yet to hear your debut, what can they expect?

I’ve got many, many different kinds of songs. Many of them have a lot of drums, and they’re quite organic and quite grand, and then I’ve got a few less grand songs. There are a lot of different moods on my album, but it’s one year old so now I don’t even know what was going on in me when I did what I did with it. But I know it’s going to be new for everyone else so that’s just how it is. And I can’t ever listen to anything I’ve made because it only makes me angry, almost, because you always think that you could have changed things, or that it could have been so much better if I knew what I know now. It’s very hard to let things go.

If it’s already been complete for a year, when did you begin writing it?

Thematically, the songs are quite melancholy, but there also seems to be a positive message about surviving difficult experiences. Is that fair?

Oh yes, absolutely. I enjoy writing about sad happenings because I think that’s mostly what I feel like I need to write about. But I don’t like songs that are just written to make people depressed, because I want there to be hope in music. There is a fine line and it needs to be encouraging as well.

Where do you look to for inspiration?

It’s mostly observational or my imagination, but a few are my own experiences. Even observing, I take things in as my own feelings so it feels personal even though it’s not. We hear about these things happening all around the world, all the time, and there is so much beautiful stuff and so much horrible stuff. Often you can watch a person and imagine how their life is, and that can be quite inspiring too. ‘Murder Song’ was from something I heard about on the news, I think, but then I made my own version. I don’t want people to think about me when they’re listening – I want them to think about themselves.

My album is basically about loss and grief and watching horrible events, but it’s also about finding hope. It’s about realising that the world is not always beautiful and neither are people - even yourself. We have to accept these things because good and bad things are a natural part of everything. You shouldn’t walk around being sad or mad about one thing that happened many years ago: you have to let these things go.

There’s a great deal of very beautiful, wintery imagery too, which presumably relates to your home in Norway. Can you tell us more about it, please?

I live in a small town. The closest city must be Bergen, on the west coast of Norway, and then an hour away by car is this little place called Os, and we live 20 minutes outside of there. It’s in a fjord called Lysefjorden – which means fjord of light – and it’s very beautiful and very calm. There are not many people living there and there are no tall buildings, and it seems like a very secret place. I live by the ocean, and there are lots of mountains where you can go hiking so it’s a very beautiful place, and I definitely tried to bring some of that beauty into my album, to be inspired.

Is there anything you’ve learned about yourself in the making of this album?

I know that I have grown a lot as a person, when it comes to being more open. I’ve understood a lot about how I really feel about things, and the world, and myself. But I think most of all I’ve learned that I’m going to keep my voice even more loud, when it comes to everything. My inner happiness depends on me being loud, and telling everyone what I want.

I’m going to be travelling a lot. I’m going to Brazil for the first time, and I’m going back to the States again for three weeks in April. And then I’m going to be on tour ‘til December I think playing many festivals and club shows. There will be a lot of playing.

And where would you like to be in say 12 months time with your music?

I don’t really have any preferences. I think I’m more an album artist rather than a radio hit artist, and I have lots and lots of songs I want to release. I’m quite happy as things are now; I don’t need more attention. It’s nice to have people appreciate my music, but I’m just gonna be inside my boat and float along the streams.