American artist Conner Youngblood isn’t quite like any other artist around. He makes introspective yet explorative ambient music that channels the natural world, like a modern-day Nick Drake – folkish, gentle harps and guitars, albeit infused with warm electronics. After years as a DIY artist he’s releasing his debut album through Ninja Tune, so we met him for a chat in London to talk about animals, politics, and his new record. 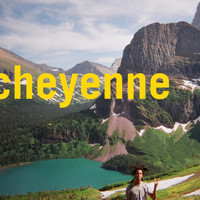 Tell us a little about yourself.

I'm not Australian! A lot of people think that – I had someone come up to me just today asking about me being from Australia, and a couple of shows I've played this year had in brackets after my name ‘AUS’. So the word on the street is that I’m Australian, but I'm from Dallas, Texas – I've never been to Australia! I grew up in Dallas then I went to college in Connecticut – I went to Yale, but I always feel kind of weird saying it because it sounds... fancy.

It's impressive! Did you study music there?

No, I never studied music until I started playing. I did American Studies at Yale but sports were usually the biggest part of my life right up until I graduated college. Wrestling was my main sport.

Travelling should be a pretty fluid thing....you'd hope that the trust system would work more often.

(Laughs) It's very the opposite of what my music sounds like, but I did include some wrestling in my last video. I didn't really start paying music until like senior year of High School and I wrote a song or two – around then I was playing banjo and piano and guitar and clarinet...

So do you play all the instruments that are on this album?

In general up to this point it's all been very DIY, right?

Yeah – like I would just be burning CDs with different tracks so some people would get different collections depending on what show they came to – like, ‘this is what I'm selling at this show’. But I'm signed to a label now so it's a little more traditional... I'm still doing all the artwork though.

And in terms of the creative direction of your videos do you have much say in those?

Yes, it’s just me and my friend usually sending back and forth a couple of photos to each other – I'll send him a single and then we'll figure it out. So a video we shot in Armenia came about through me sending him a song then him sending me a picture of something random – I think it was like a crystal ball and he said he wanted to do something based on the old USSR vibe will it took four or five places then we settled on Armenia.

A huge part of your music is about travel, right? Is that something that you've always been doing?

I mean, as much as I could. I took Japanese in middle school and high school, so I got to go to Japan on a trip back in the day. But yeah I've been travelling a lot for shows, you have a lot of off-time as a musician and you get to travel on your on-time anyway. I’ve ended up writing a lot of songs about travelling - but not about the travelling part so much as the places.

A lot of the time I write about places I haven't been, and then I've been inspired to go there after writing. I love Google Images and Wikipedia - you learn just as much from those as you do going to the places, I think. One song called ‘The Badlands’, about the Badlands National Park, that was all based off Google Images. ‘The Birds Of Finland’ I wrote after reading articles about Finland, and what kind of birds were natural to the habitat. I was getting into some pretty detailed stuff - bird calls, scenery, landscapes, the types of forests and trees that were native…

Is there a reason that nature has become such a big part of what you do?

I've always loved animals, in childhood I had pets – I had lizards, snakes, guinea pigs, hamsters, dogs. All the animals! I had a hamster in college – Sisqo.  I also have a dog, Juno, which is the best! He’s a German Shepherd and I travel with him in the US, I bring him to every show and he sits on-stage – part of the act.

But what really got me into nature is my mom. She works at WWF, so it's been there all my life. The birds thing is new - it's honestly because of the song. I was inspired to write the song from reading a magazine, then I got so into researching it that I wanted to go bird-watching. Then because of the song the National Fish and Wildlife Foundation reached out to me to do the other bird song – one thing led to another, so I actually got to go birdwatching because I wrote a song about wanting to go birdwatching having never been. But now I have my bird book, my binoculars, and I try to know every bird that I walk past by name.

Is there anything you want people to know about the album?

So usually I write about places – I always hated writing about girls or having anyone else in the songs besides just introspective things. On the album I took a step towards writing about other people in my life, but it's still through my own perspective – maybe at the end of the day I’m still writing about myself! I guess it’s selfish of me (Laughs). I've written about a load of the different women in my life, be that my sisters, friends, girls that I've met, girls that I don't know – it's been nice. I ended up placing them in spaces that they have nothing to do with, which is like back to my old way of writing. I produced it all myself, it's probably the most time I've ever spent writing and producing songs some songs took me back and forth a year I signed with Ninja Tune two years ago and I've been working on it since then but some of the songs are like six years old that I've been saving for an album in my head.

I used to just release songs the night I'd recorded them – I'd come home, double-check by playing it on my speakers and then just release it on SoundCloud as a free download. I used to love doing that actually, but I think there is something to an album still. A lot of people think it's a digital age, you just need tracks, people don't listen to albums – but the detail that goes into an album just feels really good.

We're living in a time where this freedom of travel and movement is coming under question. Is that something you feel the need to address?

I mean, it sucks - travelling should be a pretty fluid thing. I'm lucky because most of the time I'm going on business. And yesterday I was held up in one of those little cubicles - I'm always held up in those little cubicles for a random check - and there was a guy next to me who had been there four hours who told me he was trying to get to his son's birthday. You'd hope that the trust system would work more often than that… Other things that I travel for besides music is nature, and that's kind of come into question in the US a lot recently. People are trying to impede on lands for oil, but there's a wildlife park that I wrote a song about and it was cool getting to write there. But in Utah there's a bunch of things that Trump and the administration are closing down - like Bears Ears. I don't know, it's all...politics sucks. I try to stay out of it.

But it's kind of impossible to stay out of it, surely?

Yeah, it's impossible to avoid and impossible to not be affected by it. You just have to do your part the best you can, and expose people to how they can help, show them the good side of things – travelling, nature – and draw attention to how these things are being slowly affected without anyone necessarily noticing.