Back together after a lengthy hiatius, The Coral are finally sharing the follow-up-proper to 2010’s Butterfly House. We caught up with keyboardist Nick Power to discuss the inspirations behind new album Distance Inbetween, and to hear his reflections on the last two decades of the band. 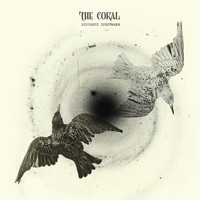 Fine, yeah. Just going into rehearsals today for the tour, which starts the 4th March, the day of the album release.

How long has it been since you last played live together?

As The Coral, five years or more.

It’s so much easier when you come out and you’re new, because everyone wants to write about new bands.

It’s been six years since your last studio album-proper. At the time of recording Butterfly House, did you think that it might be your swansong?

Yeah, I did. I think everyone knew it, really; it was just a feeling, I don’t know. I mean, you can even hear it in the lyrics. I think there was a general feeling of, “We either need a break, or we just need to stop for a bit after this album.” Even before we got signed I remember us doing seven days’ work a week, for about five years before the first album came out. So it had been a long time being together in the band.

At that point, you had been playing together non-stop for 14 years, right?

Yeah. Even before I joined, they were going for a while. But there’s always been quite a rigid work ethic as well, so I think we were burned out.

What did you do with yourselves in the time between Butterfly House and Distance Inbetween?

Well, everyone did other projects, and played music with each other and collaborated. But it was quite key to doing this album, really, because it helped us with finding new avenues and roads that we hadn’t gone down, while still being in the confines of the band. It had got to be quite a rigid way of working, [and collaborating] blew that all out of the water, which was a really good thing.

In the interim, you released your lost album The Curse Of Love too.

Yeah, that was already recorded in 2007/8. It was kind-of meant to be the album that came out that was Roots and Echoes, but we didn’t really have the means to release an album like that, because it was completely lo-fi. Albums like that weren’t getting released by major labels back then, so it took until last year for us to release it.

So what was the impetus for you to start writing together again?

James [Skelly, singer] had a solo album, and a lot of us played on that. Just near the end of the sessions, we started jamming this song which turned out to be ‘Chasing The Tale Of A Dream’, the lead track off this album. As soon as we all started playing it, we were like, “That’s definitely a Coral song.” I wish I had a more rock ‘n’ roll story to say about how we got back together. (Laughs) But it’s just music-based. Everything just fell into place after that.

Did you have a goal sonically for this record?

Yeah. We knew we wanted to make a heavier record; a more live-sounding record. I don’t know, they just had to be more direct and a bit more hungry than the last couple of albums.

Had you lost that hunger previously?

Well, yeah, I think the last few albums are quite delicate and dreamy, almost. We wanted to make that sort of album and we tried it with Roots and Echoes and I think we nailed it on Butterfly House. There was no point in doing it again, plus that kind of music is really, really hard to play live, with harmonies all over the place, and acoustic guitars. So on this one there are hardly any acoustic guitars at all. It’s more direct.

Did you have any musical reference points?

Some of the stuff we like is British psychedelia, like Pink Floyd and Hawkwind, and European stuff like Krautrock. I mean, psychedelia is in pretty good health at the moment, but it’s very American. I think what we do well is British or European psychedelia, and I don’t think a lot of bands can do it that well.

Can you tell us more about the creative process in the band?

It’s always different. Sometimes we’ll send a lyric to one another, sometimes there’ll be a full song written on its own, sometimes it’ll be born out of a jam in the rehearsal room. It was really quick for us this time, actually, to get from the embryonic stage into having a finished album. In the past, we’ve demoed a lot of songs but we barely even rehearsed them this time because everyone was still cooking off playing with other people. We’d reached a point where we could just follow the spark of the idea, capturing that first light bulb moment.

What were the challenges of that spontaneous approach?

We had to really make a concerted effort not to overdo it. The natural thing is to perfect it and keep working at it, but it was more of an effort to stand back from it and say, “No more: have a day off.” It’s a valid artistic way of working and we’d just never done it before. It was good to experiment.

It sounds quite a democratic process.

It is. Basically, whoever argues the hardest gets their way. (Laughs) Everyone knows that everyone ends up agreeing on the right way eventually.

Lyrically, do you see any themes connecting the tracks on this record?

Yeah, we always like that thing of finding real drama in the mundane, day-to-day things; things which could be the most apocalyptic scenarios in someone’s mind.

And what’s the significance of the album title for you?

It’s that thing of the distance in-between two objects or two people; that thing that’s always there but it’s an unseen thing, like a memory or an emotion. And that’s how I always think of our music: it’s not immediate in front of your eyes, but it’s a powerful thing.

It’s been two decades since The Coral formed now. How have relationships within the band evolved in that time?

There were times when everyone was trying to do the same thing and it was a big fight all the time to get anything done. It’s much easier now because everyone knows what they’re good at and people have accepted roles. It’s more of a well-oiled machine. It’s easier to be in the band now, put it that way.

Have your motivations for making music changed in that time?

No, I think it’s the same as it’s always been. I never think about money or reaching a bigger audience when I’m making an album. I’ve realised I’ve gotta except that it’s gonna be hit and miss. If something goes over with an audience, I’ve got as little to do with it as I did on the last album. There’s never been a point where we’ve been like, “Let’s really break through with this song.” It’s always been, “Let’s do something, put it out and see how people react,” because you can never gauge it. It’s always been about the music really. What a boring cliché that is.

That’s the right reason, though.

I think so. I don’t really mind people who are dead brazen about it, and say, “I want to be rich and famous.” I don’t look down on people who want loads of money and fame, and some people really thrive off it. But I can’t really do that; it doesn’t really work.

But you did have big breakout success with your first album. How did that sit with you?

Yeah, there was a little period where we were quite big. I was only about 21, so I was quite young at the time. It’s so much easier when you come out and you’re new, because everyone wants to write about new bands. But if you wanna sustain that and stay at that level, it’s a real effort, and I don’t know if we did that fully. But I’d take it again, yeah, if it were offered.

You’ve definitely retained a very loyal fan base though.

Yeah, I think so, I think so. We’re not massively connected to our fan base but I think just a lot of them are pure music fans, in the same way where you’d buy a comic because you just want to immerse yourself in a world. Our personalities aren’t out there so much, if you know what I mean. I think Radiohead have done that pretty well: you don’t really know the characters behind the music, and their music is more famous than them.

The rest of the year we tour and play festivals.

And can we expect another album after this one?