While Rae Morris’ debut album erred on the side of folky ballads, the follow-up finds her embracing bright electronic pop with glorious results. Here, the Blackpool-born singer-songwriter discusses falling in love, finding her voice and creating her superb second album, Someone Out There. 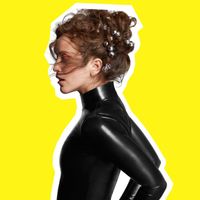 Your first album featured songs you’d been writing for many years, and with this follow-up you had to start from scratch. Was there any sense of trepidation about?

No, actually. I was so ready for it, and felt completely free not having to actually find ways to reinvent songs that had been written four years ago on the piano, which was something that happened on the first album. It was quite difficult to find a home for music that had been written over quite a long period of time. Whereas this was like, ok, let’s just do everything and anything, only making things that feel fun and exciting and new and interesting. I really felt like there were no restrictions and no boundaries, which was really freeing and super exciting.

At the centre of the album’s creation is a love story, between you and your co-writer Fryars, right?

That’s right. I met Ben [Garrett, AKA Fryars] via my A&R, and we wrote a song called ‘Grow’ together on the first record. We actually didn’t collaborate that much on the first record – just squeezing in a few moments here and there – and in terms of writing we only did one other song, ‘Cold’ together. And, yeah, he became one of my greatest friends so then when it came to making the second album my priority was to hold Fryars down and get some time with him because it felt like the most natural way of collaborating. So, yeah, it just formed into a really beautiful thing that I’m very happy with.

It’s about fierceness and just being f**king badass and strong.

What is it about his creative approach that you enjoy?

It’s developed over time and there are new things that I love and admire and appreciate, but I think in the very beginning of the writing process it was wonderful to have somebody who knew me, knew where I’d come from and knew what had actually happened on the first record. Because he wasn’t coming into it completely fresh we were able to have those conversations, just to sit and reset and talk. For me, that’s a really valuable way of making sure that the song has a meaning and actually has a context and a bit of a concept within itself. He’s really incredible at bringing out the strength in people and contributing in a way that complements what the other person does, and doesn’t take anything away from it.

When and where was the album recorded?

A couple of places. Mostly in Fryars’ flat in Borough [South London], in a little studio room. That was where a lot of the songs were written and then produced and then formed into what they are now. And then we wrote some in Los Angeles, and I took some songs and went to My Riot – who are a duo, called Tim and Roy – and we did a couple of months in their studio in Willesden, really honing the sound and recording live instruments. We did a couple of days at RAK Studios too but it was much less of a big, grand studio affair - it was more just being in comfortable, cosy environments with the right people and just taking time. It was lovely.

Someone Out There is going to surprise fans of the first album, in terms of the energy levels and pop focus. How natural was that change?

I didn’t say, “This is the shift I’m gonna make,” at the very beginning. Actually, for the first couple of months I started writing what I thought were massive pop songs – even more commercially pop than the ones that have ended up on the album, like ‘Do It’ and ‘Atletico’. I naturally went in a very, very pop direction, which was really liberating and completely fun. But sonically, it was really important to me to remain alternative-electronic, a bit gritty and heartfelt and emotional in the melodies. And production-wise it was important that nothing was there unless it was really, really bringing something to the party. So even though it’s quite full-sounding – and that brings the energy – everything is very carefully chosen and crafted to make you feel something.

Yeah! I’m so glad that it does sound like that. That’s really good to hear. I think that’s always my goal as the person that I am, just being very open. I’ve always wanted to be an honest person, and I think a lot of us want that. It would be sad if we didn’t. I think Unguarded was a step towards that, but there were still constraints and things that I wasn’t really allowing myself to do through lack of confidence and also lack of experience. I was quite young then so to grow up a little bit and discover a whole new world of sonics was really exciting. I think I was being completely unguarded on this album.

Do you work with musical reference points, or do you tend to shut yourself off from outside influences?

I don’t completely shut myself off but I think just naturally when you go to the studio every day – and you’ve got mixes to listen to on the way there, and you need to make notes at home, and you get in really late – it’s really hard to take time to also listen to the new Rihanna record. Although, of course I did take time to listen to the new Rihanna record. (Laughs) I have time for Rihanna, always. I’m always really excited when there’s a new pop song that is just f**king great, and really magical, and isn’t just vacuous. Electronic pop music that leans towards a darker side is always the thing. I was listening to Grimes a lot – I think she’s amazing.

It feels like you’re really exploring what your voice can do on this album too?

I was generally excited about that myself – just messing around and seeing what noises would come out. Because I think on album one I never really considered myself to be a singer, and I was making that transition from being a pianist/musician. People were saying, “Ok, so you’re a singer now,” and I was like, “Hmmm, I don’t know if I feel like that yet.” It took me a bit of time, and I think all the gigging and performing made me feel proud of the fact that I am a singer. And I just found it a really useful way to begin the writing process to sing something very strange and see where it went from there.

Lyrically, Someone Out There often feels very optimistic. Where were you drawing inspiration from for this set?

I think my tendency with writing lyrics is to go completely within myself and write about emotional detail; to be very focused on feelings and the very small things. So I guess I wanted to make an effort to make broader strokes on more general topics with these songs. Fryars was an incredible influence on that because, again, he forced me to stop and take a minute – and actually take days – over something, rather than just fire off a bunch of words at the end because I find it a little bit scary to go there.

I wanted to be a bit more realistic in my word choices and actually represent my speech pattern and the words that I would use, rather than the more beautiful, poetic version. That was really important; saying things as they are. And also the positivity was interesting because there’s a general concept within music that you have to be sad to write something that’s any good, and actually for me it’s quite the opposite.

Can you tell us about the song ‘Rose Garden’? It sounds like it has a story behind it.

Yeah, it does. It’s about a friend of mine who, sadly, has been very ill for a long time, living with breast cancer. I’m incredibly inspired by her amazing strength and determination to build a business and to spread the word about checking your boobs for signs of change, and inspiring young women to really be conscious about that stuff. And that’s a really hard thing to do when you’re very ill a lot of the time. It felt important to me to write something, not necessarily about her, but about when you feel helpless and you want to do something to help. So I guess it’s a song for anyone who feels like they can’t do anything but be there for someone for support. It’s about fierceness and just being f**king badass and strong.

Have you played the song to your friend?

Yeah, I have. I sent it to her and said, “This is inspired by you, and if you don’t like this for any reason I absolutely won’t put it on the album.” But very luckily, she liked it.

Can you tell us about the significance of the song ‘Someone Out There’, and why it resonated as a banner for the album?

It’s not about me, the song ‘Someone Out There’, and that’s why I wanted it to be the album title. It’s very much a song for other people rather than for myself or my own situation. It’s about the idea that there is someone out there for everyone, as clichéd as that sounds, and that you might find them in the most unsuspecting place. Yeah, it is a love song and it is a classic ballad in that way but it’s just very simple. It’s about finding that connection with someone and cherishing it.

What have you learned in the process of making this album?

I think the idea that anything is possible if you put your mind to it and push something through... Taking time over it is fine; it will happen eventually. It’s just about motivating yourself on the days where it feels slow. And I think an album doesn’t have to cost an absolute fortune - you can do it with your friends and you can sit in bedrooms on laptops. We’ve got a lot of technology now to make sh*t happen, so I feel really excited for anyone sat at home wanting to make music because it’s so possible and it’s so easy. But don’t be too good and steal my job... (Laughs)

But [making this album] has been the best couple of years I’ve ever had. It’s been really genuinely the greatest time and really something that I needed after being away for ages touring and not feeling completely settled. I’m really grateful for the time that I was allowed to take over it.